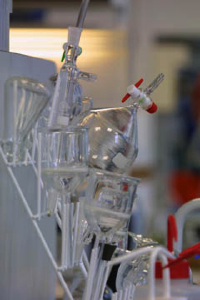 Henry Rzepa (Editor) + other members of the chemistry department

Audio and video podcasts from undergraduate lecture courses given in the Chemistry Department. The audio materials are annotated as "enhanced" Podcasts with full lecture notes, handouts, and linked to rotatable/and or animated 3D models (of molecules, their vibrations, and their molecular orbitals. Requires Java) and to much original literature.

The mechanics force field, how it is used to optimize molecular geometries, and a case study.

Overview of quantum mechanical methods, the Hamiltonian, the best set and extrapolative methods.

The techniques of molecular visualisation, and the sources of coordinates.

Conformational analysis of 3,4,5 and 6-membered rings.

The conformational preferences of alikeness, aldehydes, ketones, esters and amides.

The factors responsible for the conformation of alkanes and heterosubstituted alkanes.

Hiostorical preamble, characteristic properties and examples of the major types of pericyclic reactions

Examples of sigma tropic reactions, illustrating the equivalence between inversion and antarafacial modes.

Examples of pericyclic additions and eliminations, with two joined up case studies.

A number of examples of electrocyclic pericyclic reactions.

The theory of orbital symmetry, with selection rules derived from transition state aromaticity

Cyclo-octane, trans cyclo-octene, how to resolve it into configurational isomers, and atropisomerism in caryophyllene. Restricted rotation in biphenyls.

Conformational analysis of rings, and sugars.

Analysis of cyclopropane, cyclobutane, cyclopentane and cyclohexane, including ring-locking with large groups and anti-periplanar relationships of substituents.

The conformations of alkanes, including butane, from the perspective of the three controlling influences in conformations.

The relevance of conformational analysis, definitions and introduction to the theory.

Relative stability of carbonium ions, the dimerisation of the Pirkle reagent, the Diels-alder reaction inside a cavity, molecular tennis balls

Examples of sigmatropic rearrangements, including [1,5] hydrogen shifts and [3,3] Cope.

The orbital correlation diagram for cyclobutene/butadiene, and aromaticity.

An exploration of chemical searching in three dimensions.

A demonstration of the use of Office 2007/EndNote X4 and Mendeley. Use of Web-of-Science for bibliographic searches.

An overview of information sources for chemists at Imperial College, 2010-2011

The phenomenon of atropisomeris, and restricted rotation in biphenyls

The conformation of cyclohexane and substituted cyclohexanes, including conformational locking. Trans-decalines, and anti-periplanar relationships, leading to steroids

The Gauche effect and its origins, dealing with heterosubstituted alkanes, alkenes, aldehydes, ketones and esters

A lecture covering the early history of and definitions in coformational analysis and introduction of the basic theoretical underpinnings of the topic.

A demonstration of the WOS bibliographic search, including export to EnNote, setting up a style and use with Word 2007.

A short demonstration of the email and IT facilities at Imperial College, including access to course notes and other materials on the Blackboard VLE.

A summary of how computers organise files, and how chemical journals arose and can be accessed from virtual libraries.

The reactivity of singly and doubly substituted benzenes, and of hetereoaromatics

The properties and reactivity of benzene

Examples of an electrocyclic + cycloaddition pericyclic cascade, and examples of sigmatropic migrations.

Examples of cycloaddition reactions illustrating both supra and antarafacial modes and endo/exo isomerism.

Introduction to the theories of conservation of (molecular) orbital symmetry with orbital correlationi diagrams, and derivation of selection rules. Huckel and Mobius transition state aromaticities.

Pericyclic reactions, historical survey, definition and general properties, and examples of electrocyclic, cycloaddition, sigmatropic, ene and other types of pericyclic.

DESCRIPTION
Audio and video podcasts from undergraduate lecture courses given in the Chemistry Department. The audio materials are annotated as "enhanced" Podcasts with full lecture notes, handouts, and linked to rotatable/and or animated 3D models (of molecules, their vibrations, and their molecular orbitals. Requires Java) and to much original literature.

Archived from iTunes at https://itunes.apple.com/us/podcast/chemistry-enhanced-podcasts-imperial-college-london/id210821692. Items in this collection are restricted.
ACTIVITY